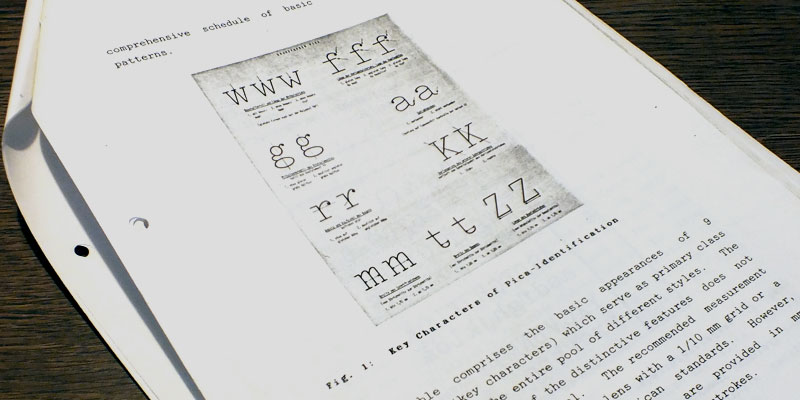 DO YOU KNOW JOSEF HAAS

Josef Haas has to be regarded as one of the most famous German experts in examination of typewritings.
During his career he contributed a lot of his knowledge to many popular cases. Besides that, a considerable number of his publications in reputed papers like „Kriminalistik“ and „Archiv für Kriminologie“ attracted the interest of the scientific community. The most elaborated scientific work of Josef Haas was published in 1972. His „Atlas der Picaschriften“ (a comprehensive encyclopedia on Pica-script) has – in accordance to the opinion of highly qualified experts in the field – to be considered as the most reliable and efficient working instrument in typewriter identification in the world. A lot of samples of this „Atlas“ were sold to Document Laboratories all over the world, e.g. to France, Australia, Switzerland, the Netherlands, U.S.A., Canada, England, Israel and Denmark.

The „Deutsche Kriminologische Gesellschaft“ (German Society for Criminology) honored this scientifically significant contribution with conferring the highest order for scientists in criminology to Josef Haas, the ‚Beccaria Medal‘.

In the course of his free time Josef Haas collecteda lot of detailed information about different typestyles through the years 1952 – 1979 which additionally provided a sound basis for system determination and started with the evaluation of about 500.000 writing samples. This seems to be the largest collection worldwide.

During his official work he was rather often contacted world-wide by colleagues with requests for specialized training courses, supplementary information or help in critical cases. The authors of this paper are particularly glad to having had a lot of win of the experience of Josef Haas.

In the following years after his retirement, the evaluation of data originally started by Haas, was continued by his son Bernhard. Up to now, we all in the field have access to another typewriter identification-system which comprises all typestyles besides Pica-script.